Three of the OWL LAB fellows, David Lockard, Hadassa Goldvicht and Guy Dolev presented installations and performance in the frame of the international conference "The Dybbuk - Undisciplining the Archive", 25.4.2022.

Visiting Kfar Shaul, one quickly senses that the place wasn’t originally built as a psychiatric hospital. The stone structures scattered over the hill that make up the complex are mostly residential, and clearly quite old. The hospital is surrounded by a wall. The original name of the place is not on the maps, and there is no sign telling of its history.

A person I love was hospitalized there for several months, and I visited her nearly daily during this period. Every day, when I got back home, I tried to draw a map of the place from memory. After a month I knew every window, every door, every staircase that was left. It has been three years since she was discharged. I have not been there since, and I have not looked at my maps. I am drawing the map for the first time since then.

The Kfar Shaul Mental Health Center was opened in 1951, within repurposed homes and structures of the Palestinian village of Deir Yassin. Three years earlier, on April 9th 1948, Zionist paramilitary forces attacked and conquered the village. During the battle and its aftermath, some 100 Palestinians, a large number of whom were civilians, were killed in what is widely considered one of the worst massacres of the 1947-8 war.

My first image of the hospital, from my initial visit, is this: a man walking outside the fence has stopped to reach through it. He is trying to pick a fig off a tree that’s on the other side. He has difficulty reaching, but in the end manages to grab a fig. He inspects it carefully, and eats it slowly, like one does with fruit one has picked oneself. I wonder if it is tasty. It is August. The fig must be quite hot. 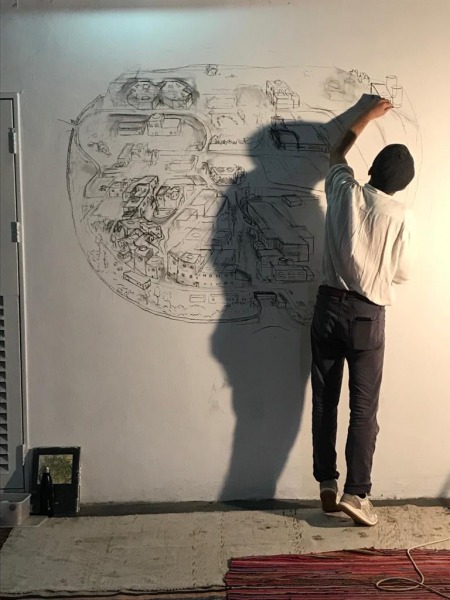 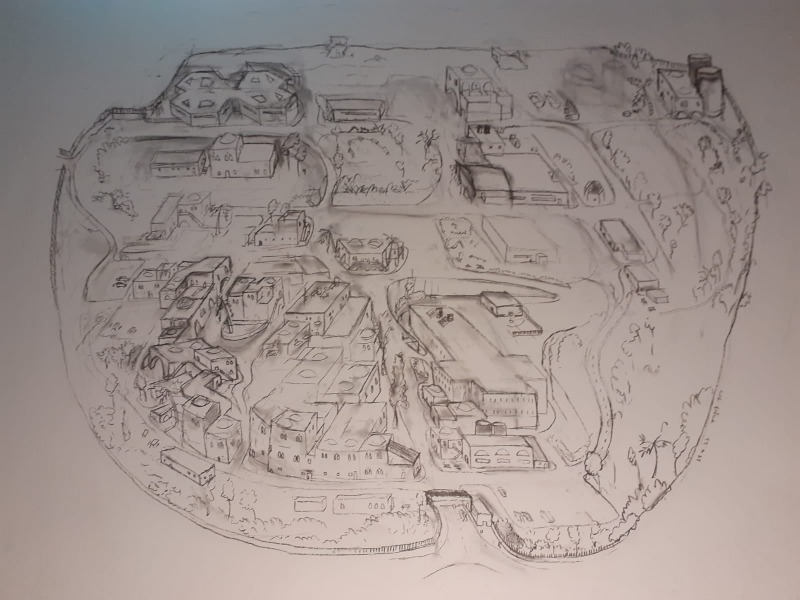 Lullaby (video, 2012) Hadassa Goldvicht and Anat Vovnovoy | The OWL LAB - Objects, Words and Labyrinths. An Attempt to Get Lost in Performance Research (Department of Theater Studies, Hebrew University & Mamuta Art and Research Center In the frame of The Dybbuk - Undisciplining Archive [more soon]

In Lullaby, Goldvicht worked with Anat Vovnoboy asking members of the Israel Museum community—staff and museum visitors—to be filmed singing the lullabies that they remember from their childhood, or that they sing to a child, or grandchild. Despite its innocuous title, the project is highly political. It centers on an age old custom of singing to a baby, yet reveals the extent to which “our bodies contain meaning and reflect our culture, our parents, and our history.”

In the museum, against a plain white backdrop, the artists filmed people singing lullabies but do not use their names. Nevertheless, the “performers” can be identified in part by their dress and the over 20 native languages they speak, creating an intimate and rare cultural view of Israeli society while reflecting the relationship between hierarchy and language. English, Dutch, and Hebrew are mostly used by the museum’s directors and curators while Russian, Amharic and Arabic are used by the guards, electricians and cleaning crew.

Over five hundred people were involved in the project, which, while designed to showcase individual memory within the institution, also reveals how much the Israel Museum represents a microcosm of Jerusalem socially, politically, economically and emotionally. The people presented alone, in pairs and as families are all unique and passionate in their own way. In one instance, we see a mother and father with their newborn. In this perfect lullaby moment, the intimacy is poignant and the specific language becomes irrelevant because, every song is a melodic expression of love, which softens each person’s demeanor. For Goldvicht, they are the type of pre-lingual ritual she always found herself returning. “Lullabies,” she says “even though containing language, have something unmasked about them that distilled force I always look for.”

The love of a mother for a child, or of parents for their children is a classic form of love. For Goldvicht, the public’s engagement is perhaps the most satisfying because the relationships of the people who participated changed. When they contributed, many after an initial hesitation, and then viewed the final version, they expressed a range of emotions. Some felt greater camaraderie, while others felt some sadness or yearning for more love. In addition, something shifted in the dynamics of the institution, so that the viewers walked around recognizing the participating guards, cafeteria workers, and volunteers. As Goldvicht stated “Janine Antoni once said something that is a kind of an 11th Commandment for me [that is that] when you make work and get extremely specific and personal, that’s when the work opens up and becomes universal again. As an artist making work that is very personal, that’s the point I always try to reach.” 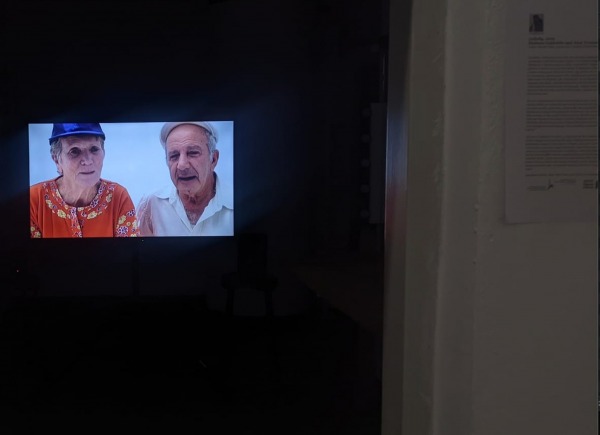 The piece Wound is a slide-project- ed documentation of a wound on the artist’s hand. The small abrasion has been documented from the day of the injury to the day it was healed. The rotating slide projection shows the wound slowly healing, but then slowly getting worse again in an endless cycle.

This eternal wound, projected on the wall, has both Christian and Jewish references. The actual repetitive documentation of the healing process by the artist is in itself a kind of ritual. Goldvicht’s practice revolves around the careful study of rituals and gestures to reveal social, political and religious hierarchies. As in many of her works, Goldvicht manages to quietly bridge the physical.

Grotesque reconstruction experiments is a work in progress, aimed at researching the inherent failure of dance reconstruction, an old established practice in the history of western dance. This work is a branch of Dolev’s wider academic and performative study of anaesthesia as potential of choreography, whereby the anaesthetization is applied locally, only on one organ, in the shape of a prosthesis. With this unfortunate condition, Martha Graham’s 1930 mythological piece Lamentation is exhibited as a historical legacy helplessly laid to sabotage, disfigurement, and misinterpretation. 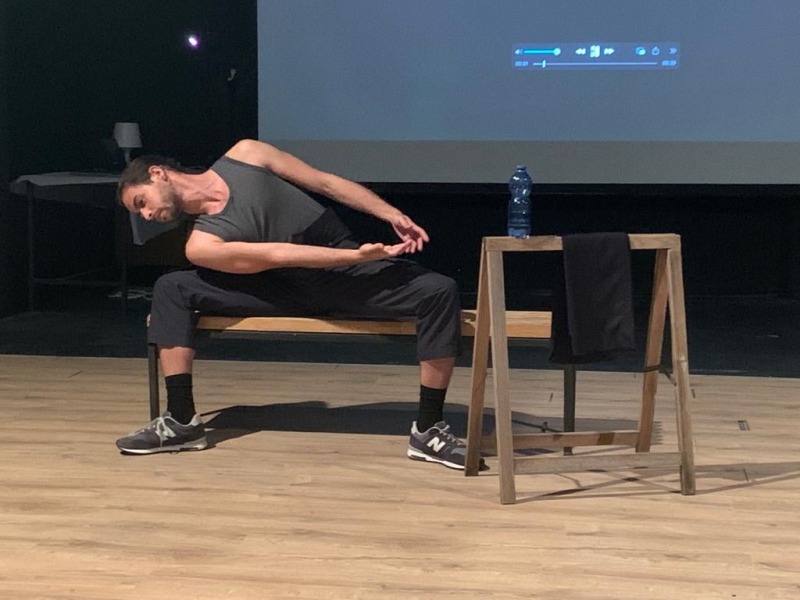 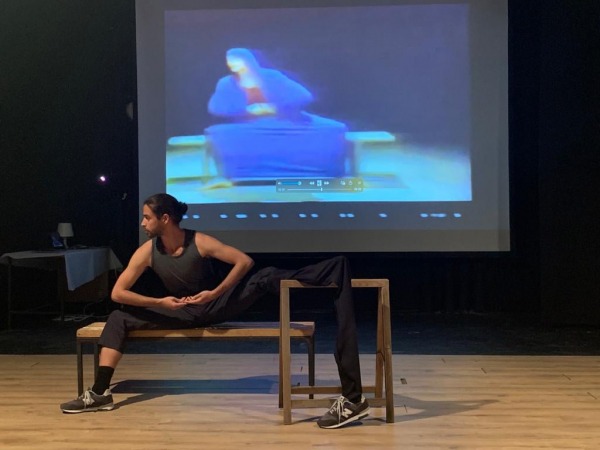 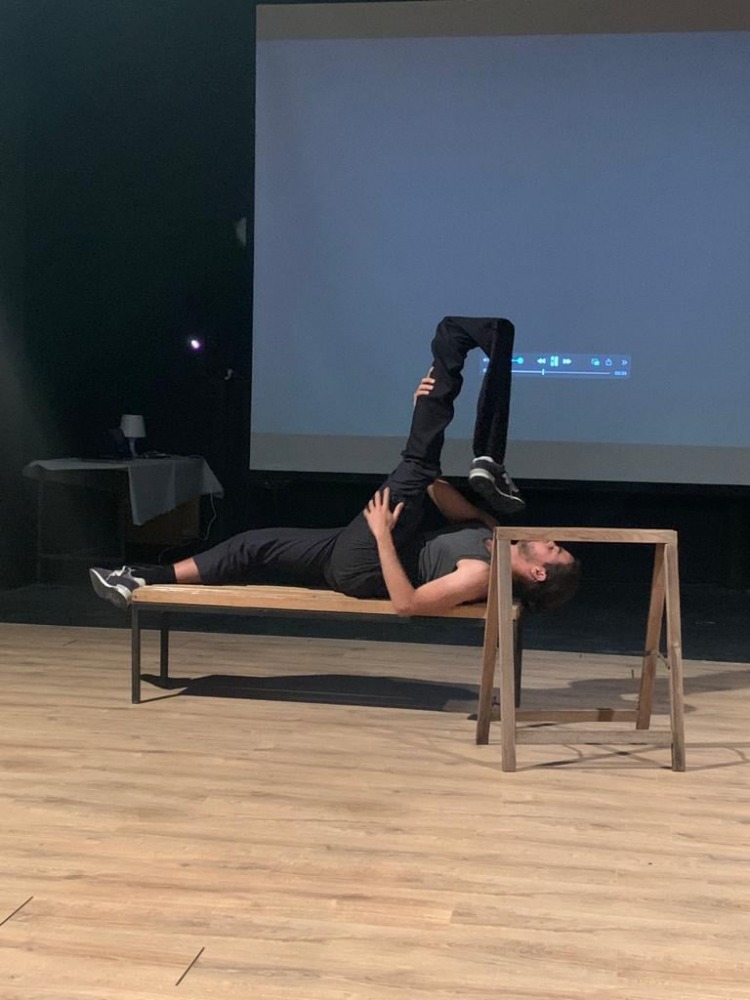